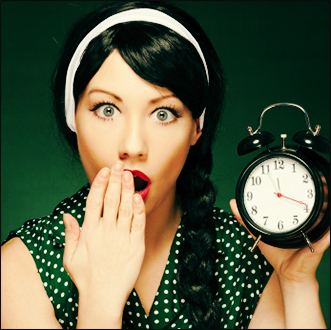 I have a confession. I am a habitually late person.

People seem to think this is something I do intentionally or on purpose. In all actuality, it is one of the biggest sources of self-imposed anxiety in my life- I hate being late everywhere. Over the years, it’s something I’ve tried to remedy: I’ve gotten fancy alarm clocks, set 18 different alarms on my phone in various apps, even told my family to lie about event times by a half hour. I’ve tried setting my clocks fast. I’ve tried waking up earlier. The truth is, even when I wake up earlier, I am still likely to be late.

It’s almost as though I have only a vague perception of time. I honestly hate this trait in myself more than almost anything. As a night owl personally, I always thought my problem stemmed mainly from my sleep habits. But it’s more than that, I’ve learned. What’s hard to explain is that, it’s frustrating for me too- just as much as the person I am holding up. It’s gotten me in trouble at virtually every job I’ve ever had. I’m always that person who is rushing in to work five to seven minutes after I should be there. Thinking back to my days in high school, I think it was pretty much the same then too- in fact I have a vivid memory of sprinting down a long hallway in my high school in extremely high heels and fishnets, trying to make the bell.

It’s not something I do consciously or in an egotistical manner by any means; that’s ludicrous. But, that is a common misconception of people who are habitually late: they just don’t care, or are downright rude, and self-centered. So to combat that idea, I’ve done some research.

As it turns out, I’m not alone in this plight. An estimated 15-20 % of Americans fall into the ‘habitually late‘ category.
Those with certain personality traits, like anxiety, thrill-seeking behavior, and low self control may have a better likelihood of being habitually late. Also, getting distracted easily and feeling uncomfortable or nervous about social situations plays in as well. In fact, chronic tardiness is said to be similar to someone who has a problem with overeating – especially in constantly stating they will change the behavior, then not following through. Overeating comes with the comfort that food provides the overeater. But in the case of habitual lateness, it goes back to the various personality traits that may contribute to the tardiness.
For instance, some with the thrill-seeking behavior may be habitually late because it’s the adrenaline rush of hurrying to a deadline that the person may be almost addicted to. Those lacking in self-control, however, may be habitually late because they lack the ability to take charge and begin a task without having the pressure of the gun held over their head. Some people also take on far too many obligations and then don’t give themselves enough time for each realistically.

So how can you stop being late all the time?

Don’t ever tell anybody anything. If you do, you start missing everybody.